Yin is a Slicksilver slug, and one of Junjie's newest slugs. She debuted in the Slug Fu Showdown movie, and joined Junjie when he used his Slug Fu senses to find and pull her from beneath the ground, as a demonstrate for Slug Fu for Eli.

After Junjie had taken her from the ground and Junjie and Eli had found new slugs and named them, Junjie demonstrated how to defend yourself against what was on the three piles of metal junk in front of them with just one shot and one slug. Using Slug Fu, he brought her around all three, making her pick up items on the way and throw them into a another pile, pushing things back alot.

After she turned back normal right over his shoulder, she looked a little surprised. Later, when they were attacking the spiders, Junjie used her a few times, along with Slug Fu to guide her, to defend him and Eli when they were surrounded by platforms with Spiderlings firing at them from them and their own platform. 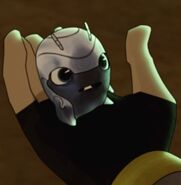