"Slugterra: Into the Shadows"
Xmitters are uncommon electric type Slugs. It was the favourite Slug of Straggus. In its protoform, it has teal and black skin with lime coloured antennae and stomach. It has no known preferred environment. When launched at velocity, Xmitter slugs are able to generate an electromagnetic pulse that temporarily disables any nearby electronic devices. Xmitter slugs has only been seen in episode The Hard Part but was mentioned in The Thrill of the Game when Trixie suggested using the slug.

It later reappeared in the episode Slug Day when Burpy made it to enter Oogleby's blaster so he would shoot it and disable all of the equipments that held the Slug Racks, freeing the slugs. Trixie used the Xmitter in Slugterra: Into the Shadows to disable all the ghoul machines and blasters temporarily.

A famous Xmitter has been seen in the show as one used to belong to Straggus but was later taken and is constantly used by Shane Gang but it has not been named yet.

A ghouled Xmitter is called a Transplitter.

The Xmitter Slug as his protoform, has dark blue skin, brown skin on his back and head, light green belly and horns, and brown spots on forehead.

The Xmitter Slug at 100 mph, has greenish-blueish skin, brown skin on back, very light green horns, brown skin on the back of its hand, and three claws on each hand. It resembles a crocodile.

Because its Jambler move shorts out all electronics in a certain area including the slinger's blaster, Xmitters are very strategic, risk vs. reward slugs that are mostly used by very smart slingers. It is, however, useful for stopping opponents that rely on more technology than just their blasters, such as the The Game Master or Dr. Blakk & Tad's ghouling machines.

However, a smart slinger can easily counteract the downside of an Xmitter by slinging a Slug that could effect the field right after it, such as a Hop Rock or Blastipede, enabling the user to continue attacking even while handicapped in electronics.

Overall, Xmitter are good slugs to use as stall techniques and against technology reliant opponent's. 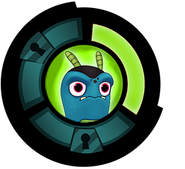 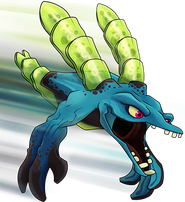 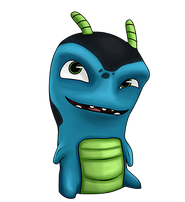 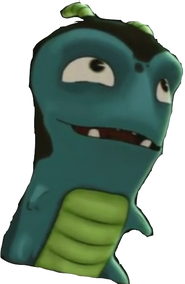