A "Wrist Blaster" or "Wrist Slinger" is a type of hands-free blaster that's strapped around a person's wrist, and is seen to give an upper-hand in battle.

First seen in "Endangered Species", wrist basters were first introduced to the series in The 99 Caverns, where they could be seen as a common yet rarely seen commodity. However with the introduction of Junjie, then came the introduction of The Eastern Caverns and a whole new side of rich history and respect for these blasters.

While they may be overlooked in the 99 Caverns; in the Eastern Caverns, wrist blasters were made as a refined form of blaster-slinging to give easier access to performing the ancient art of slugslinging known as Slug Fu and since then they have become a status symbol for Slug Fu Masters, and no one but a Slug Fu Master is meant to wear them. 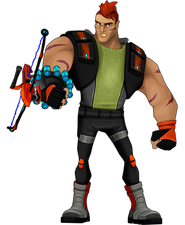 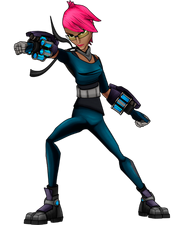 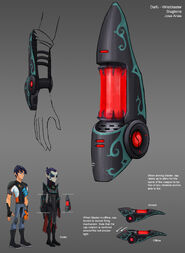 The Dai-Fu's Wrist Blaster Concept Art
Add a photo to this gallery
Retrieved from "https://slugterra.fandom.com/wiki/Wrist_Blasters?oldid=83233"
Community content is available under CC-BY-SA unless otherwise noted.