Vinedrill is an uncommon green and white plant element slug with pinkish eyes that is mainly found in Wild Spores Cavern who are similar to Neotox Slugs except for the colour schemes. Vinedrill is a plant Slug and it's power type is plant power, vine, and spore attack. In the slugisode Vinedrill, it shows that Vinedrill is a very defensive slug.

Some famous Vinedrills are Tangles, who belongs to Eli Shane.

vinedrill slugs are excellent defensive slugs thanks to thicketthorn and they are also able to help you against poisonous gas upon learning vinevent. itchypants can be a good way to handicap your opponent; tendrella generates vines strong and thick enough to restrain a cave troll and therefore it could easily win you a duel under certain circumstances along with ivydust and vinelash: the former is the only purely offensive move of the vinedrill slug.

this slug has many vine-like limbs at velocity, and thus it can be a good way to take down a large number of slugs at the same time; its weaknesses are slugs that can directly hit it and that can burn or cut through their vines, like threshers and forgesmelters 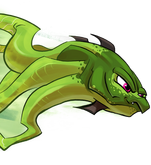 Vinedrills in The Great Slug Robbery