Gangster, The Leader of his Gang (Formerly)

Viggo Dare used to be the acting lawkeeper of Slag Rock Cavern. He ruled this cavern with an iron fist and a loaded blaster, keeping order through fear. He is shown to have had some of Dr. Blakk's current-most faithful servants, such as Maurice and possibly Locke and Lode.

This tough businessman ran a mining operation, and his management tactics include force and hostility whenever his plans went sideways.

In his debut episode, Viggo defeats Dr. Blakk Sr. in a duel, forcing him to retreat and leave his son behind.  Viggo forces young Blakk to work in a mine.  As Blakk grows into a successful small-time thief, pick-pocketing other enslaved miners and even the gangsters, Viggo gives Blakk a spot on his crew. Eventually, he fires Blakk, due to him loosing an entire slug shipment, and throws him out of the cavern. After Blakk is defeated during the winnowing, he returns, throwing Viggo out of the cavern and taking his blaster. 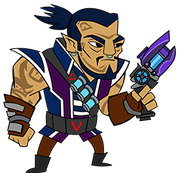