The Unstoppable Warriors are new giant Stone Warriors superweapons. They are nearly indestructible giants that are stronger, faster and can rapid-fire multiple Ghoul Slugs at once just like a Gattler. They are also powered by life essence, a little more and they become antonymous with a mind of their own like Stone Warriors only more advanced and better. 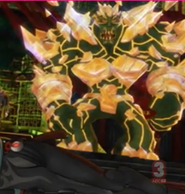