Titans are large tanks, which are almost able to reach speeds of 100mph. They feature deployable cannons, and can cause mass destruction. First seen in Upgrade, they are used by Quentin to free Blakk who was currently being transferred to Stalagmite 17. The tanks can also travel underwater. A stationary battle station mode has been seen, having the wheels shielded, all cannons deployed, and in the case of 1 tank, a Gattler on a mount. 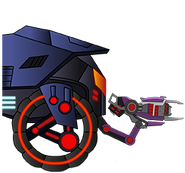 Add a photo to this gallery
Retrieved from "https://slugterra.fandom.com/wiki/Titan_Tanks?oldid=86703"
Community content is available under CC-BY-SA unless otherwise noted.