It Comes by Night

“Wait, one of those dudes is a girl?”
―Eli Shane on the Power Triplets[src]

The Power Triplets, aka the Power Trips, is a powerful brother, brother, and sister team that has been training together since they were born.

They face off against the Shane Gang in the tournament. They are said that they were trained together ever since they were born. Trixie says that each sibling knows what the others are going to do before doing it. The triplets are:

During Eli's first tournament, he encountered the triplets, dueling them with Kord and Trixie. There, they all fired Hop Rocks at a rapid rate at the Shane Gang during the tournament. The siblings manage to reduce the gang's cover to rubble and scatter them. After a plan formulates, Kord runs to another cover and distracts the triplets with a Phosphoro. Trixie then uses her Arachnet to tie them up while Eli uses Banger to trap them with rocks. They appeared again at the winnowing, but due to selfishness, they were dismissed. When they refused to leave, the master used a Fusion Shot, blowing the trio out of the training grounds. They appeared later on in the series, in the episode "It Comes by Night", assisting in the hunt for the High Plains Monster, but were quickly incapacitated. 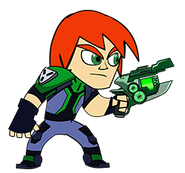 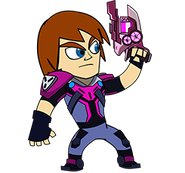 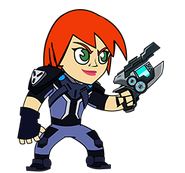 The Power Triplets, after being hit by the unbeatable master's Negashade's Shadowblak attack.