The New Kid Part 2 is the fifteenth episode of Slugterra.

Along with Twist, the Shane Gang plan to rob a train carrying the last of Dr. Blakk's Dark Water. They work out the plan and are trapped by Diablos Nacho. Kord realises that Twist works for Dr. Blakk and warns Eli. While in the fight, Twist traps Eli and duels him. He tells that he is an orphan because of Will Shane. When Eli has the advantage in the duel, he escapes. In the end, Dr. Blakk replaces El Diablos Nacho with Twist, sending Nacho back to The Deep Caverns. 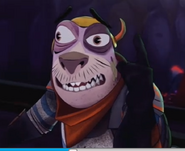 Retrieved from "https://slugterra.fandom.com/wiki/The_New_Kid_Part_2?oldid=86836"
Community content is available under CC-BY-SA unless otherwise noted.