All Slugs from Eastern Caverns

The Imperial Palace is where the sinister Emperor's henchmen have taken the stolen slugs from the pillaged caverns and locked them away here, in the Emperor's evil domain. Without the slugs energy, the Eastern Caverns have fallen into ruins. After the fall of the Emperor, The Shane Gang used the cavern beside the Palace as there Camp site. The palace, was used to host "Slug Day" later after the defeat of The Emperor. 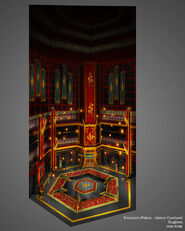 Add a photo to this gallery
Retrieved from "https://slugterra.fandom.com/wiki/The_Imperial_Palace?oldid=82350"
Community content is available under CC-BY-SA unless otherwise noted.