Suds is a Bubbaleone Slug who belongs to Eli Shane. He has been used multiple times to save Pronto and to defeat Captain Malvolio Drake, defeat Munch and has saved the gang's lives multiple times. One such time was in "Deep Water, Dark Water" when the Shane Gang ran out of air. He is also been seen to wash clothes in the Slugisode "Know Your Slugs: Be Creative". 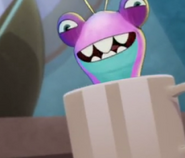 What's up in the background?

I've got a moustache!