"Slugterra: Slug Fu Showdown"
Spirex is a character that debuted in the Slug It Out! game, and made his offical debut in Slugterra: Slug Fu Showdown as the main antagonist. He is a member of a spider like species called the Arachnoids and wished to destory Slugterra so that he and the other spiders can rule what remains of it and it would have gotten away with it too if it wasnt for the meddling Shane Gang.

This eight-legged villain firmly believes that spiders are a superior species and they should rule Slugterra. With his army of “spiderlings”, he just might be able to start the reign of the spiders! 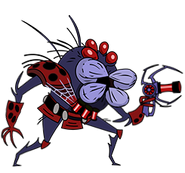