Caves with lots of stalagmites and rocks

Speedstingers are red orange and gray shell, metal element Slugs that are used for trick shots and complicated moves. Strangly enough there are some shots that can't be done without a Speedstinger. The Speedstinger is most well known for being used by Mario Bravado.

A famous Speedstinger is Stunts, who belongs to Eli Shane.

Another Famous Speedstinger is Ricochet who belongs to Mario Bravado

There protoform consits of a small grey helmet and back with a white oval on their stomach and the rest is orange. When they Megamorph, they have small fins on each side of their heads.

They are able to make complex, improbable shots with their ability to ricochet against a surface and able to make any angled shot, even if the target is miles away or if you can't even see the target. A famous Speedstinger is Stunts who belongs to Eli Shane. Mario Bravado also uses a Speedstinger. Sometimes, they look more like bullets than Slugs when fired. Speedstingers have the ability to curl up into balls, this was shown when Mario Bravado used his Speedstinger to free Pronto and the other prisoners.

Designed more like a ricocheting bullet, Speedstingers are common among trick shot slingers. While its arsenal seems offensive, Speedstingers are rarely seen in combat, with only elite slingers like Eli Shane using them. One common use seen is being used to hit the wrist of an opponent, causing them to drop any held item.

stunts with his new slugisode 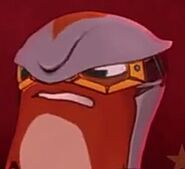 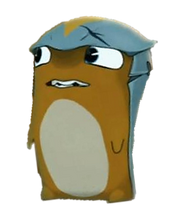