When the Slyren reaches 100 MPH, it starts singing within a few seconds of its transformation. Those who are within its range fall asleep. It can also sing while in protoform, as seen in "Snowdance" that a nest of the Slugs keep the Ice Ogres hibernating. Eli used the one that he caught to put all the Ogres back to sleep. Pronto used Eli's Slyren to save Danna Por from The Gentleman's Geoshard. It is a very powerful slug, as it can break the crystal of a Geoshard and put the Ice Ogres to sleep, and can easily put someone to sleep.

A famous Slyren is Dozer, who belongs to Eli Shane.

A ghouled version of Slyren has not yet been seen in the show.

When transformed, the Slyren has the ears of a bat, frog-like arms, and a fishtail. It has a yellow-coloured belly but it's mostly coloured blue. Its tail and mohawk are coloured turquoise.

Whistleer can stun an opponent with its screams, distracting the opponent and giving the slinger the upper hand if he/she acts fast enough. Sleepytime allows the slinger to make a quick getaway without harming the opponent. This move is also very useful against Ice Ogres, Ghoul Slugs and other large group of animals like a swarm of Bees. Blammerang helps the slinger to attack his/her opponent from afar. HyperSonic is similar to Whistleer but causes more damage. This attack is possibly the one that can shatter Geoshard's crystal. 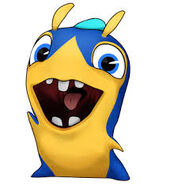