All over SlugTerra
The Surface

There are currently 48 known breeds of Slugs that fall into 12 different elements. Each breed of Slug has its own unique powers. While many of those breeds are used for battling, some, like the Bubbaleone, can also be used in everyday life such as for household chores.

Slugs are kept in special cylinder-shaped cases called slug containers. Blasters have three parts, the base, barrel and space for reloading in which slugs are fitted and then fired by fusing energy of slugs and blaster.

When these slugs are fired with the help of Blasters, they reach a speed of one hundred miles per hour and transform into a stronger form called a Velocimorph which can be highly destructive.

Once they are fired, they can only be re-used if their Slingers are fast in picking them up and reloading, otherwise they will return to one's hideout if one is friendly to them.

How To Catch Slugs!

All Slug-Slingers have to expand their arsenal and for that they use certain techniques like only talking or using special slug collecting devices.

Care and Feeding of Slugs!

Slugs need to be fed regularly so that they remain healthy, and baby slugs need extra special care to help them mature.

Younger children tend to keep Slugs as pets, often bonding more closely with their Slugs than Slugslingers do.

Due to their battle capabilities, Slingers often see their Slugs as nothing more than ammo. No longer a childhood pet, many Slingers don't think twice about trading or selling their Slugs. In some SlugSlinging competitions, the prize for winning a duel is being allowed to take a Slug from the losing Slinger's arsenal. As a result, slugs have little choice in who their owner is, and can change hands frequently.

If experienced enough, slugs can megamorph/or evolve into a more powerful form called Mega Morph Forms when they are shot at two hundred miles per hour.

If a slug is not experienced enough, it will get thrown off by the speed. By using an accelerator in the blaster, you can make a slug mega morph more easily.

Slugs are small, bipedal creatures that are often brightly coloured. Their colouration or markings often offer a hint as to a Slug breed's element, although this is not always the case.

Most Slugs can survive and breath underwater without the need to surface, although almost all species of Slug need Torpedo Shells in order to reach velocity underwater. Additionally, fire-type attacks don't work underwater, making breeds such as the Infurnus highly vulnerable.

Slugs can adhere to surfaces at virtually any angle, and were sometimes seen even sleeping hanging upside-down from a cavern ceiling. They also have exceptional agility and endurance for their size, able to jump great distances and withstand severe impacts.

A velocimorph is the Slug's form upon hitting 100mph, transforming into a larger, more powerful creature. In almost all cases, the velocimorph bears a reasonable likeness to the Slug's protoform appearance. The Lavalynx is the most notable exception to this rule. Flopper Slugs are the only known Slugs to not transform upon reaching velocity.

Upon reaching 200mph, a Slug will obtain a mega velocimorph form, which slightly changes the features of the individual Slug's protoform as well as their colour markings. With the altered protoform, a Slug will glow when it reaches 100 mph without being fired, acting as a speedometer to let their Slinger know when enough speed has been achieved to reach megamorph form.

Slugs are combat-capable and many Slugs enjoy dueling or, at least, transforming at velocity. In ancient times, in the time before blasters, Slugs used their environment in order to gain enough speed to transform. Occasionally, some Slugs still use their surroundings for their advantage in battle, especially when their Slinger is unable to get them to velocity, due to problems with his or her blaster or incapacitation.

Transforming at velocity, more so than actually battling, is how a Slug gains experience. For Slugs, experience comes in the way of increased Slug Energy. Since blasters are powered by Slug energy, more experienced Slugs make for more powerful shots. If a Slug gets too powerful, its energy can overload a blaster's fusion core, damaging the blaster. Once a Slug gains experience, it never loses its increased levels of Slug energy, even if it goes a long time without reaching velocity.

As Slugs gain more experience, they also gain new abilities. Often, these powers are related to combat, but some breeds, like the Fandango, fill more supportive rolls. The most powerful of Slugs can become Guardian Slugs, a position that almost all Slugs wish to achieve.

Ghoul Slugs are slugs that have been transformed into feral mindless weapons. Once transformed, the slug becomes fueled with chaotic evil and takes on a menacing appearance both in and out of velocity.

Guardian Slugs are slugs that have reached a specialized level of experience and power usually with the help of the Shadow Clan, and become guardians of good and gain higher status as a result.

The five Elemental Slugs are ancient slugs of great power, and said to be the ancestors of all slugs found in Slugterra today.

Slugs can eat almost anything, but too much "people food" isn't good for them. A Healthy Slug requires a balanced diet, which can be achieved by giving them slug food.

As told by Trixie in "Fun Facts About Slugs", slugs love leafy green vegetables, though it is hinted that slugs do eat meat as Spinner is attracted to a meat's smell in the Slugisode "Spinner in: Tangled Web".

In the wild, slugs eat leaves (a Fandango is shown eating a leaf in "Slugterra: Return of the Elementals") and berries (shown in "Slugs In The Wild").

As seen in the Slugisode: Fun Facts About Slugs, it shows that slugs are usually quite friendly to other slugs, regardless of species, sleep early, and have good table manners.

Slugs, through dark science, can be corrupted and are turned into monstrous beasts called Ghoul Slugs. They are only distributed by Dr. Blakk. These slugs are unpredictable, somewhat unstable, vicious, and mischievous.

Slugs have been shown to have human level intelligence and even possess their own hidden society of sorts. 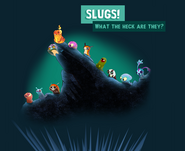 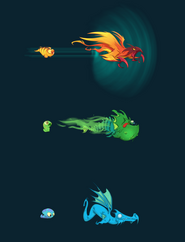