SlugTerra is a massive underground world inhabited by Slugs and many other mysterious creatures, and is the main setting for the series.

SlugTerra ("Slug" - "Earth") is a massive underground world located beneath The Surface and above The Deep Caverns, and is the native home of the Slugs.

Important Notice: Before the events of Slugterra: Ghoul from Beyond and the discovery of The Eastern Caverns, the term "SlugTerra" was previously used as another way to describe The 99 Caverns, however since then the term has been given a much broader meaning and describes any land that consists of slugs.

SlugTerra is largely populated with Humans and Slugs, however, it's also home to a number of other species, both humanoid and otherwise.

In the underground world of SlugTerra there are many types of plants to be found.

Digital map of The 99 Caverns

A map of The Eastern Caverns 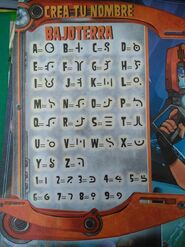