Sid has no sense of smell, which is probably why he doesn't mind hanging out with Boon the Goon.

He and Boon battle against Eli in the Molenoid Kingdom. Sid made his first appearance in The World Beneath Our Feet Part 1, but he has always appeared as a cameo, until the episode, Endangered Species, where he finally makes one speaking line. A more notable appearance Sid made was in the "Slug It Out!" game, where his name was finally revealed and he's a playable character. 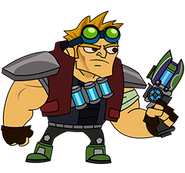 Retrieved from "https://slugterra.fandom.com/wiki/Sid_the_Kid?oldid=84267"
Community content is available under CC-BY-SA unless otherwise noted.