Shanai was the "Unbeatable Master" of The 99 Caverns. She had not been seen in SlugTerra in nearly 20 years (possibly because she went to other realms). Her favourite and most experienced slugs were a White Boon Doc named Ping and a Negashade named Yang. She was one of two people who could perform a Fusion Shot. She was killed by Blakk's Goon Doc. Soon after, her White Boon Doc and Negashade were fired, creating a portal that sent her (and apparently her Slugs as well) to her final resting place.

This slinger is an amazing battler despite her age, and is said to be the master of an unbeatable slinging technique and one of the greatest living slugslingers. Shanai only takes on one student at a time, who must first prove that they are worthy of her wisdom.

Debuting in The Unbeatable Master , Shanai was shown entering a local bar in her cavern, and after dealing with 2 aggressive slingers, she demands that the current Shane come face her. By the time Eli and the rest Shane Gang get there, Shanai has already thrown several other slingers out of the bar. After revealing herself to Eli, she starts to inspect him as he introduces himself as Eli "Shane", however she interrupts and says he has to earn the name Shane, and she tells him to participate in the winnowing and disappears. The next day, She begins the winnowing, quickly eliminating several slingers that she though were unworthy in the first round alone. Later in the day, once the winnowing has become a duel between Eli Shane and Twist. Dr. Blakk interrupts, challenging her.

However, Blakk uses Twist as a decoy and strikes her from behind with a Goon Doc, killing her. With her last words, Shanai uses her Negashade and White Boon Doc and sends herself to an unknown area. All of her later appearances are in flashbacks and mentions, for example, Shanai appeared in one of Blakk's flashback, specifically of his winnowing duel with Will Shane, her last pupil, during Back to Blakk.

Little is known about Shanai's past, other than that she has been known to train every Shane in the ways of Slugslinging (except Eli).  At some point 30 years ago, Eli's father, Will Shane, and Dr. Blakk came to learn from her, but she could only take on one disciple, so she held a competition between the two slingers to determine who she would teach. In the end, Shanai chose Will because Dr. Blakk could not form a connection with his Slugs as Will could.  To this day, she wonders if she had made the right choice. 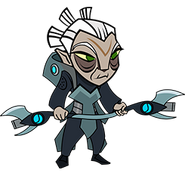 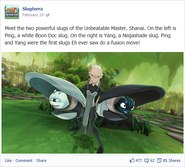