“Those who harm slugs will PERISH!”
―Shadow Clan Leader[src]

The Shadow Clan are a group of creatures who live in SlugTerra.

These terrifying monkey-like creatures are feared throughout the 99 caverns. Not much is known about them, since no one dares venture into the dark outskirts where they live.

The Shadow Clan have been displayed as territorial and are prone to aggressively defend their Territory by grabbing Slugs on their back and throwing with their tails. Members of the Clan are rarely seen alone, tending to travel in groups and attack en masse. No one knows where the Shadow Clan came from, just that they were the first creatures in SlugTerra.

Although members of the Shadow Clan do not use blasters or Mecha Beasts and appear to have minimal infrastructure, they have been shown to have advanced technology, such as the Shadow Talker and the Shadow Walker. The Shadow Clan is a sort of universal persona non grata (the lack of being allowed by other groups in Slugterra), though this suits them just fine. In general, they avoid the affairs of other species—with the exception of Slugs—and keep to themselves unless disturbed. While they can understand the common language of SlugTerra (I.E.: the language the show is dubbed in), they tend to ignore what outsiders say to them unless relevant to their interests.

When Eli asks what the Shadow Clan wants, their leader cryptically replied "We want the same thing that all Shanes want," but doesn't specify what exactly that is. It's implied that the objective is to protect slugs and keep all of Slugterra safe and flourishing. The matter of which that is reached, however, doesn't seem to be consistently agreed upon between both parties.

The Shadow Clan are mysterious beings who have lived in SlugTerra for a long time (reportedly since the beginning) and seem to be misunderstood by most. At the same time they seem to worship the Slugs and devote their lives to helping them, even if it means other species get harmed in the process. They also look to protect the slugs' home (SlugTerra) and have built defenses to insure the safety of the slugs.

In the 99 caverns, where they were first introduced, the Shadow Clanners have made a reputation of terrifying the other inhabitants. To most inhabitants they are considered evil creatures who are later revealed to be allies of the Shanes, and may help out in battle if it matches their interests. Despite this relationship, the Shadow Clan also have strong ideals, which can tend to even irritate the Shanes and that can disrupt their relationship. They have built structures around Slugterra for their own purposes--a Guardian Gate and a transporter to other caverns, such as The Eastern Caverns.

Unlike in the 99 caverns, the Shadow Clanners of the Eastern Caverns are seen as the guardians that they truly are. They protected the caverns, going all the way back to when Yang defeated The Emperor, and built a Guardian Gate to seal him in The Deep Caverns. They even later took part in the "Battle of Peach Blossom Spring". However after losing that battle to the Emperor, the Shadow Clanners lost hope and all except for one (Shadow Claus) decided to leave the Eastern Caverns.

Known as the "Giver" and eventually Shadow Claus, this Shadow Clanner is the last remaining Shadow Clanner of the Eastern Caverns. According to the Clanner, it fought along side Junjie on the day the Emperor invaded and ultimately achieved victory. The Clanner also reveals that the others abandoned the caverns soon after the Emperor took over, but this clanner decided to stay behind and continued doing whatever it could to help the caverns, and that was by delivering slugs to maintain the balance of Slug Energy across the caverns every year, which the people come to call it "Slug Day" or "Slugmas".

While early in the show the Shadow Clan was presented as a dangerous force that no one wanted to encounter, multiple weaknesses have been introduced as the show progresses. 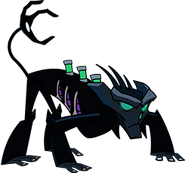 Slinging mechanics 2: Slug being ejected from pod, under its own power or by way of an internal mechanism.

Not impervious to fire.

Eli's expression upon encountering the Clan the second time.

Burpy's reaction to encountering the Clan in "The Slug Run".

Breaking through an ice wall without using Slugs.

Fandango Slugs, while syncing with the Shadow Clan. 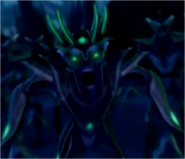 The King of the Shadow Clan