Sedo is a Molenoid the debuted in The Slug Run.

A famous and tough molenoid slugslinger, Sedo is Pronto’s Life! Long! Nemesis! (According to Pronto, at least.) He’s considered very suave and successful for a molenoid. Pronto fumes at the very sight of him.

This is because he is a mole, on a mole (mech). As it turned out, He was Dr. Blakk's hidden "mole" in the race. You could say he's a mole, who's a mole, on a mole, trippling his molitude to unfathomable proportions, as he puts it. He was defeated by Pronto when he shot Sedo with a Crystalyd, burying Sedo alive. He vowed to come back to get Pronto, one day. He reappears, in Keys to the Kingdom later at Molemound Cavern trying to become king. At the end, after dueling Pronto he was forced to do thing for the king while Pronto, still technically in control of the cavern goes off on adventures. Later Sedo captures the Elemental Slugs in Slug Fu Showdown. 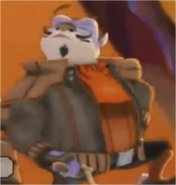