Season Three[1][2][3][4] was the third season of Slugterra consisting of thirteen episodes and originally ran from January 17th, 2016 to April 26th, 2016 on Family CHRGD; the first four episodes out of the thirteen, however originally had a theatrical release as a feature film on August 15, 2015 in Canadian cinemas.

In Season Three, Eli and the Shane Gang help their new friend Junjie return to his home in the mysterious Eastern Caverns, only to discover that the sinister Emperor has been ruling with an iron fist for 20 years! The gang promises to help Junjie defeat the Emperor. It won't be easy going up against the Emperor's henchmen, army of stone warriors and arsenal of slugs twisted by dark magic. But with their own loyal, powerful slug buddies and the ancient slugslinging secrets of Slug Fu on their side, Eli, Junjie and the Shane Gang are determined to save Slugterra, and the Surface World, from the Emperor's diabolical plans.[5][6][7] 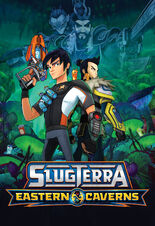 The Journey to the Eastern Caverns (aka Slugterra: EC part 1)

The Tournament of the Underlords (aka Slugterra: EC part 3)

The Emperor (aka Slugterra: EC part 4)

The Fall of the Eastern Champion

The Lady and the Sword

The Emperor Strikes Back