Season 4[2][3][4] is the fourth season installment in the Slugterra series and was first released in Canadian cinemas on August 6th, 2016 and later premiered on television starting October 4th, 2016.

As the Shane Gang returns to the 99 Caverns from their Eastern adventure, they discover the Shadow Clan has decided to put slugs before the needs of the people. The Gateway Cavern has been overrun with slugs and it’s up to Eli and the gang to restore balance. Met with resistance, help comes from an unexpected source – 13-year-old Tad and his slug Pieper, who just arrived from the Surface[5]. 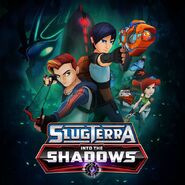 Slugterra: Into the Shadows movie poster

"Back on the Shane Gang"

"Out of the Shadows"