Rammstones are a common Earth element slugs that are coloured red and tan, with blue horns and fists and brown eyes. They are primarily found in Low Rock Cavern & Land's End Cavern. Its power type is ramming, smashing, and rocks. When it hits 100 Mph it gains the characteristics of a ram. The Rammstone slug weakness is the Arachnet slug. It is also Kord's favourite slug who he calls Bludgeon.

A famous Rammstone is Bludgeon, who belongs to Kord Zane.

The Rammstone is one of the best basic common attack slugs there are. This slug has a multitude of offensive capabilities, ranging from single target close combat with Battelup to a ranged attack with Rockstorm to a multi-enemy hitter with Sandscorn. A Rammstone also has the more defensive capability of throwing up the terrain or a wall with Slabhenge, making it even more versatile. The main issue of the Rammstone is that its attacks are all basically alike; they get in close and do a lot of damage upon impact. This fact allows more ranged slugs, particularly the Arachnet, to defeat them easily. To counter this, firing another slug before it such as a Thresher to counter the Arachnet's web is a good idea.

A Rammstone, being healed from ghouling by a White Boon Doc.

Side-view of a transformed Rammstone, showing the tail and one hind leg.

Pronto's Rammstone, taking aim at a stay of pipes to send them crashing down on some of Blakk's goons. 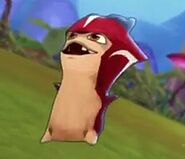 A Rammstone in a blaster

Rammstone in Blakk's hand, about to be ghouled