A famous Polero is Bolo, who belongs to Eli Shane.

A ghouled version of Polero is called a Barreto. 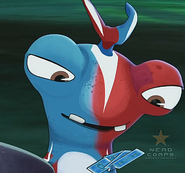