Mo is an Enigmo Slug who belongs to Eli Shane.

He first appeared in Endangered Species where he was initially hunted by a trio of Slug hunters who sent Eli flying. Where he landed he found Mo and a trap. Soon Gerhard Stocker appeared wanting the Slug, but Eli refused.

In "The Return" it is revealed that an Enigmo slug is the key to the Fusion Shot as when you are hit by it you are then able to see a slugs aura and see if it is compatible with another for a Fusion Shot.

It is shown that he knows his abilities to assist in Fusion Shots (like when he tried to help Eli with his Fusion Shots). He is later used in Roboslugs episode to defeat Quintin in Round 1 and he is briefly seen in Light as Day. In Return of the Elementals, he has fallen in love with the Enigmo slug given by Will Shane. 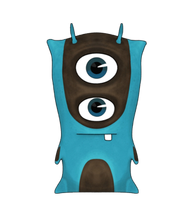