Mecha Mutiny is the seventh episode of Slugterra.

When even Kord can't find a way to fix what's wrong with the new upgrades to the Shane Gang's Mecha Beasts, it's time to go to the source: the wondrous Mecha Forge! Hoping to find the cause of the glitch, the gang instead uncovers a huge conspiracy--hatched by Dr. Blakk!

The gang is out hunting a very speedy Slug (Hoverbug). During the chase their Mecha-Beasts malfunction and the slug taunts Eli before flying away.

Back at the hideout Kord tries to figure out what the issue is but he can't. He thinks it might have something to do with the new upgrades he got from his friends back at the Great Western Forge (The Mecha Beast factory) so they head there to have it checked out. When they get there they find that the Cave Trolls that run the place have left the building, that is now run by a newly-comer, Darius Yorman, who sends the malfunctioning Mechas for a control and, invited by Kord, shows the Gang round the Forge.

The following scene shows Dr. Blakk that is getting a barrel of Dark Water, and later injects some in the energy core of a bull Mecha.

Back at the Forge, Darius is leading the Gang at the end of the visit, claiming that part of the building is closed to be mended: Eli is less and less persuaded and forcefully leads Pronto in the room where the last phase of the assembling of Mechas takes place, and the duo actually find some new technicians who are Ghouling Mechas with Dark Water. After briefly confronting the technicians, the duo find Grendel and the other Cave Trolls, that Darius had imprisoned to take the control of the Forge: he is sabotating Mechas for Blakk, so that people in Slugterra could stop using them and turn towards Blakk's train company; trixie and Kord too meanwhile have been caught, but are freed by Eli and Pronto.

The Trolls and the Gang manage to stop Blakk's technicians, but many mechas have already been Ghouled, starting from the Gang's one: so, quickly Eli shoots Doc to free the Mehcas from Dark Water, successfully, and finally catch Darius and his teammates.

The final scene shows Trixie who has filmed all she could about the sabotage while Blakk is disappointed for the failure at the Mecha Forge and orders Nacho to produce more and more Ghouls for the future. 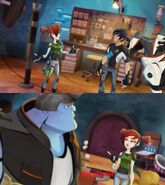 Retrieved from "https://slugterra.fandom.com/wiki/Mecha_Mutiny?oldid=84574"
Community content is available under CC-BY-SA unless otherwise noted.