Maurice is Dr. Blakk's right-hand man and one of many Blakk Employees. First seen in "The World Beneath Our Feet Part 1", Maurice is voiced by Brian Drummond.

A former resident of Slag Rock Cavern, Maurice has known Dr. Blakk since they were teenagers working for the villainous Viggo Dare. Maurice was the first to ally with Dr. Blakk, and his loyalty has made him Dr. Blakk’s chief informant and right-hand man.

Maurice made his debut appearance in "The World Beneath Our Feet Part 1" He was watching Eli Shane's qualifier round and in the background watching Eli and in the end he is seen informing Dr. Blakk about Eli possibly being related to Will Shane.

He appears in "The World Beneath Our Feet Part 2", after Eli's 2nd round against Jacques and Kord's and Trixie's rounds, where he is again seen reporting to Blakk about Eli Shane still being in the tournament.

After Kord, Trixie and Eli's match, he and Blakk are seen going in the SlugTerran Express to attend the tournament to confront Eli.

He is later seen in "The Trade", where he supervised Eli, while Eli waited for Blakk.

He reappears in "The Slugout", where he introduces Billy to Dr. Blakk as a new recruit, who asks for help to get revenge on the Shane Gang, and Blakk then starts ghouling Billy's arsenal into Ghoul Slugs.

Maurice is later seen in the episode "The New Kid Part 2" contacting Twist on behalf of Blakk on how Twist plan is going.

Maurice is then seen in "The Gentleman and the Thief", after Dana Por escaped with Blakk's Blaster, and he comes running into the room, with his blaster and asking Blakk what happened, but Blakk tells him he whether not say, so Maurice then tells Blakk that he'll find someone who can get rid of the problem and holds a audition to hire the best mercenary to get back at Dana Por.

In "Back to Blakk" it is revealed that before Maurice served Dr. Blakk, he once served a gangster named Viggo Dare from when he was a teen to his early adulthood. Then when Blakk (in his early adulthood) returned to Slag Rock Cavern to challenge Viggo, Maurice was the first to join Blakk, once Viggo had been defeated and banished. Prior to joining up with Blakk, Maurice was a member, initially reluctantly, of Viggo's gang.

He is again appeared in "Light as Day" to Inform Dr. Blakk about the Shane Gang almost at The Citadel with some fire power.

His whereabouts and fate after the defeat of Dr. Blakk, is unknown.

Maurice was a formerly reluctant ganger of Viggo's Gang who was smart never to cross him. After Dr. Blakk defeated Viggo Dare, Maurice immediately joined him and became a high ranked employee though rarely seen in the field. He was smart as a Recon man when he correctly suspected Eli was related to Will Shane. 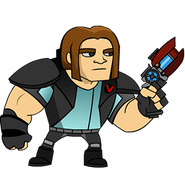 Maurice as a teenager.

Maurice, in the background at Herringbone Cavern. 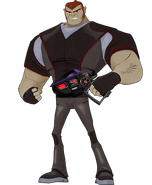 Blakk, Maurice and one of Blakk's Unnamed Goon in the Slugterran express

Maurice in The Trade

Maurice in the train

Maurice in The Gentleman and the Thief

Viggo Dare with Rubin Evern and Maurice as a Teenager

1/7
Community content is available under CC-BY-SA unless otherwise noted.
Advertisement