Malvolio Drake is a character that debuted in Undertow. This pirate captain is the scourge of Undertow Cavern, sailing the waters of Slugterra in search of treasure and trouble.

A ferocious and rude reptilian pirate, Malvolio Drake has spent years terrorizing the subterranean seas in Undertow Cavern. With his faithful Mimkey, Malvolio commands his ragtag crew aboard his fearsome ship, the Nautilus.

Malvolio Drake -- "Captain" as he is referred to—is a sea-faring tyrant that robs passing slugslingers of their Slugs. He appears as an Amphibianoid with a blue scaley body, with a red crest, equipped with a red and brown armor. 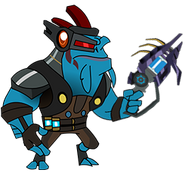 All right, Mimkey. This one's all yours!

Malvolio and Brutale fighting each other in "Deep Water, Dark Water"