“Is that a Thugglet Slug"
"Yep. Dazzle him Loki”
―Eli Shane and Twist[src]

Loki is a Smugglet Ghoul who belongs to Twist. One of Loki's powers is to disguised himself in another form.

Loki debuts in "The New Kid Part 1", helps the Shane Gang to save the Ghouls.

Loki's appearance is similar to that of a Tempesto but he has a black mohawk and only his belly is red while the rest of his body is black. 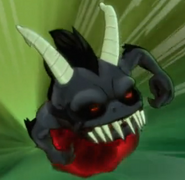 Loki disguising himself as Twist
Community content is available under CC-BY-SA unless otherwise noted.
Advertisement