"Slugterra: Into the Shadows"
Locke[1] and Lode[2] are twin slingers who work for Dr. Blakk. They served as tertiary antagonists of Slugterra.

These two brothers are demolition experts and henchmen for Dr. Blakk. When something needs to get destroyed (or someone needs to be persuaded by that threat) Blakk sends these two. Locke is slightly smarter. Lode is dumb as a bag of rocks.

Both twins are large-built men with oversized backpacks and heavy armour. Locke is slightly smarter than Lode, who is pretty dumb, yet neither can keep ahold of Burpy in The Journey Home.

Despite their general incompetence, Locke and Lode have worked for Blakk for many years and are demolition experts. And based on the show's timeline, this means that the pair have been working under Blakk for at least five years.

In Light as Day, they participated at the final battle with Blakk against the Shane Gang but are defeated by Trixie and Kord, and fled offscreen.

After the defeat of Dr. Blakk they attempted to capture the Elemental Slugs from the Shane Gang but failed. They are later seen by the Shane Gang while they are committing another theft, but accidentally notice the Gang's presence and, after a chase, stopped by Tad.

Locke, appearing as a background character in the first episode. 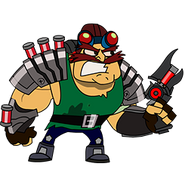 Locke in The Slug It Out! App. Note that he has not a beard, but a moustache.

Locke in the opening scene, about to be punched by a Rammstone.