Lightwell is the thirty-third episode of Slugterra.

Burpy is sick, and the only thing that will cure him is a trip to the Lightwell—a mysterious, hidden power source only slugs (and the Shadow Clan) know the way to. Burpy can't make it on his own, so Eli vows to take him there. He convinces the Shadow Clan to point the way, but the journey is fraught with peril. Meanwhile the rest of the Shane Gang must fight side by side with the Shadow Clan when Blakk's minions attack.

The episode starts with Eli facing a small squad of Blakk's goons, lead by C.C.. After discovering Burpy is sick, Eli flees, But C.C. manages to get a tracking ghoul on Eli, as requested by Blakk. After Eli returns, Pronto(who was glued to the ceiling) tells Eli about The Lightwell. After getting to the entrance, with some slug help, Eli, Banger, Spinner, and Chiller journey into the Lightwell, facing multiple guardians along the way while the gang must stay outside the shadow clan guards. While this happens, C.C. and his squad, using Dark light from a Phosfearo ghoul to deter the Shadow Clan and tries to distract the gang while Blakk sneaks into the Lightwell. After reaching the well itself, Eli is stopped by Blakk who tries to destroy the well while Burpy is rejuvenating his energy. Blakk however, fails when his ghouls are cured due to being in close proximity to healing slug energy. After being throw back by a fireball, Blakk is taken by the shadow clan as well as C.C. who was also defeated by the rest of the gang. The mood is quickly changed when the Shadow Clan leader states that the battle for Slugterra has just began. 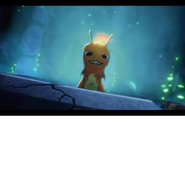 Retrieved from "https://slugterra.fandom.com/wiki/Lightwell?oldid=85766"
Community content is available under CC-BY-SA unless otherwise noted.