John Bull is a very talented and mean Slugslinger who owns a Ghoul Slug. He makes his debut as a strong slugger, in "The World Beneath Our Feet Part 1". He is known as one of the best on the tournament circuit, John Bull isn't much for subtlety. He likes to bash his way through an opponent.

One of the best slugslingers on the tournament circuit, John Bull prefers a direct approach, especially if it involves bashing. If you’re in his way, he’ll bulldoze right through you, both inside the dueling ring and out.

He goes on to beat Eli Shane in the finals of the Slugging competition in the "The World Beneath Our Feet Part 2". He also helps Blakk fight the Shane Gang in "The Trade". He is later seen in A Distant Shore to join gar's Expedition. He reappears in What Lies Beneath briefly with Dr. Blakk and other henchman to push the Shane gang down of the edge. He was also seen in "Back to Blakk", trying to break Blakk out of Stalagmite 17.

John Bull, standing in a group wailing to receive Ghouls from Dr. Blakk.

John Bull in Back to Blakk

Dr. Blakk and John Bull fighting The Shane gang in What Lies Beneath

John Bull in Back to Blakk 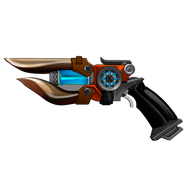