Jimmo Shane is the great uncle of Eli Shane and uncle of Will Shane. He is first mentioned in "A Distant Shore" and later seen in a flashback in "Back to Blakk".

During his time in SlugTerra, Jimmo kept a notebook written in the Shane code. This book contained extensive notes on SlugTerra, including how to travel back up to the Surface. Somehow, Gar Revelle ended up with Jimmo's notebook, although he lacked the cipher needed to translate the code.

At a certain point, Jimmo left his role as the Shane, giving his nephew Will his blaster and role.

He might be mentioned by Eli in Slugterra: Into the Shadows as the uncle who took care of Eli since his mother left him at the age of 10. Though, this is not confirmed, but it is likely after his retirement he must have lived in The Surface and taking care of Eli. 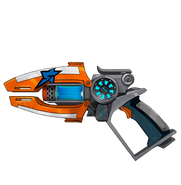