Thresher
Banger (formerly)
AquaBeek
Some Ghoul Slugs in "The Trade"

Jacques is a recurring character in the series and appears in the game Slugterra: Slug It Out!.

Hailing from the deep swamp caverns, Jacques likes to spice up his slug matches with risky moves. Eli won Banger from him after defeating him in the first round in episode 2. His favourite Slug is the Thresher. He reappears in The Trade as he joined Blakk and ends up receiving Ghouls. He is also seen in The Unbeatable Master, in Shanai's court. Unlike most based slingers Jacques treats his Slugs more than just ammo and his favourite slug is a Thresher. 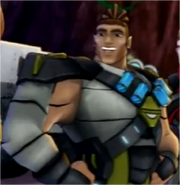 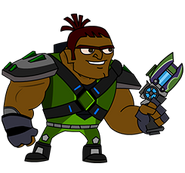 Jacques in the Slug out game (Profile image)

Jacques taking out his favorite slug a Thresher

Jacques and Eli in The World Beneath Our Feet Part 2

Jacques briefly seen in "The World Beneath Our Feet Part 1"