SlugTerra Wiki
Register
Don't have an account?
Sign In
Advertisement
in: Slugs, One Star Slugs, Fire Slugs,
and 2 more

Hop Rocks are Fire Element Slugs that are often used as explosive ammunition, similar in appearance and function to Grenuke Slugs. They are found in Quiet Lawn Cavern.

A famous Hop Rock is Rocky, who belongs to Eli Shane.

A ghouled Hop Rock is called a Hop Jack.

In Protoform, Hop Rocks have tan skin and a yellow back with red spots covering them.

When transformed, they keep their yellow shell but their red spots disappear and their skin turns gray. The yellow parts of their body becomes fragmented armor. They gain this armor on their arms, hands, and tail. Their tail gets a round end. While they fly, sparks emit from them in a short trail.

Hop Rocks are one of the most commonly used Slugs in SlugTerra, especially when it comes to battling. In addition to being a common and easy to acquire Slug, Hop Rocks have a solid move set.

Even an inexperienced Hop Rock can do serious damage with a Sploder move, dealing a solid hit to a single opponent or damaging the surrounding terrain. With Meta Mine, a Hop Rock can control the battlefield, which is excellent for any Slinger whose style tends more towards the strategic. Upon learning Scrapnel, a Hop Rock also becomes an excellent option for duels where more than two Slugs are in play at any given time, since the Hop Rock can deal damage to multiple targets with a single move.

A Hop Rock inside Blakk Industries. 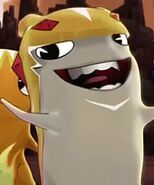 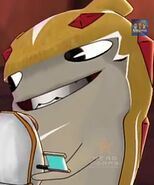 Hop Rock after being unghouled by the healer Doc

views of the hop rock