Harmashelt is the Ghouled version of the Armashelt. Dr. Blakk owns a Harmashelt and so does Blakk Guard's.

They are midnight blue with an orange shell covered in pale green spikes.

harmashelts are ghouls suited for raw offense, as they have a limited moveset wich only involves offensive attacks: cannonshot can be used to destroy walls, obstacles and of course to attack enemies. blamabarrage is a ranged attack, that allows the harmahelt to strike while not making contanct with its target: this move is useful to slugs that can only do significant damage when they're close to their targets, like rammstones, hexlets, enigmos and flatulorhinkuses. firekraken is a tricky move to land, but the reward for the former landing is incredible: the target gets seriously damaged, and considering how rough and violent the attack is, the enemy slinger will probably lose its blasters and slug canisters. this slug has a great matchup against hoprocks and grenuke slugs, and has a horrible matchup against healer slugs 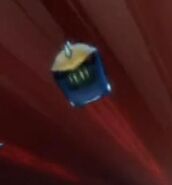 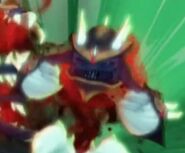