Goober is a Jellyish Slug who belongs to Eli Shane. Eli first used it in retaliation for Billy trying to knock down all the Grenuke slugs in Quiet Lawn Cavern. He was also used in "Inheritance" to attack Dana Por. He was used to cover the Iron Warrior with goo to give time for the Shane Gang to escape The Imperial Palace. 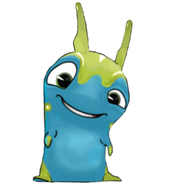 Chiller, Spinner and Burpy got covered by Goober's Goo