Glasses (real name is unknown) is a member of The Hooligang.

The tech expert for the Hooligang, Glasses likes to win his blaster and Mecha parts from other slingers in duels. With Billy and Shorty by his side, he doesn’t always win them fairly.

He is first seen in The Slugout, working alongside Billy and Shorty. He, along with the rest of the hooligang, are later defeated when Grenuke Slugs bombard them.

In the episode "Snowdance" he and the rest of the hooligang are seen again, this time accidentally awakening an ice ogre. At the end of the episode the gang is once again defeated, this time by use of a Slyren slug. He later again takes over Quiet Lawn Cavern again.

In "Slug Fu Showdown" with Billy and Shorty. Sally attempts to stop him and the rest of the hooligang using her Flopper slug. Old Timer however failed. The Elemental Slugs arrived and aided her which send them packing out of the cavern. 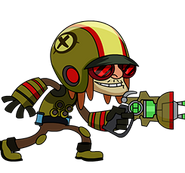 Glasses in "Slug it Out"