​​Ghoul Slugs (aka Ghouls & Goons) were Slugs that have been corrupted by one of the various forms of "ghouling" using Dark Energy. Ghoul Slugs can be turned back into regular Slugs by healer Slugs or The Lightwell. Dr. Blakk uses a small machine that gases a Slug and then transforms it. Some Slugslingers prefer Ghouls over Slugs because they are more powerful than standard Slugs, even though Ghouls are hard to control and prone to running away once fired from a blaster.

While Ghouls are stronger than regular Slugs, it has been seen that a highly trained Slug can defeat them. This indicates that Ghouls are not automatically stronger than Slugs, as seen in "The Trade", where Blakk offers to give Eli his slug back in a stronger state. Overall, the strength of a Ghoul is dependent on the overall strength of the Slug's original power. A Ghoul can probably get stronger through training like normal Slugs, though this is unconfirmed.

A Ghoul usually has more powerful, damaging and longer lasting effects than their counterparts (Ex. Amperling, Nightgeist) while others have effects that are opposite to their original counterparts (Ex. Goon Doc, Vamparo) or gain additional abilities (Ex. Tempesto, Cryptogrif). Either way, a Ghoul is made to be more powerful and destructive than their original forms.

Ghouls are primarily feral and possess destructive tendencies. However, there are certain cases of a Ghoul behaves like regular Slugs, as shown with Loki. When Burpy was ghouled, he remained loyal to Eli, though exhibited a slightly twisted personality due to the dark water's corruption. Additionally, in a Slugisodes, an Ampeeling, Frost Fang and Tempesto acted as slug bullies towards Rookie.

When Ghouls are shot out of a blaster, they tend to run off and form wild packs but this does not seem to line up with the show where C.C. is seen calling his scattered Ghouls back by a whistling.  It is possible that the Ghouling process makes Slugs less likely to listen to their Slinger, requiring a stronger bond in order to control them. In Ghoul from Beyond however, Kord states that many ghouls escaped in the battle.

It has been seen that the creation of Ghouls can cause devastating effects on Slugs. One such case would be Burpy in the episode "Lightwell", whose power was quickly being drained by the dark energy of Ghouls making him very sick and unable to transform when shot out of a blaster, forcing him to visit the Lightwell.

As seen in "Back to Blakk" a large number of Ghouls can open a portal for the Darkbane, but only four can pass through. The first ghoul was long thought to be the Tempesto that sent Will Shane to The Deep Caverns, but it was actually a Greneater, as revealed in Back to Blakk and The Fall of the Eastern Champion.

There are 37 different kinds of Ghoul Slugs so far in the show:

Loki in "No exit" 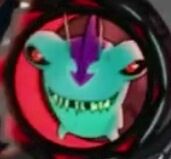 Thrasher in a blaster

Early drawing of a Frostfang 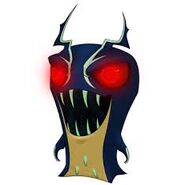 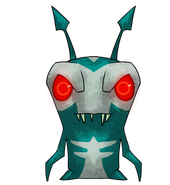 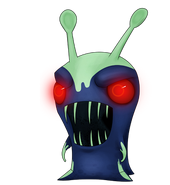 Possibly an illustration of a ghoul, dating from before Blakk discovered dark water.

A Ghoul tube, with the opening sealed.

Darkfurnus (Slug It Out 2 Velocity)

Amperling (Slug It Out 2 Velocity)

Joules as an amperling in what lies beneath

Slugs enter at the top.

A Hop Rock, in the Ghouling machine about to be turned into a Hop Jack.

Then are sealed inside the chamber..

Dark Water vapor filters up from the red lighted areas at the bottom.

The chamber fills with vapor. When the Slug becomes a Ghoul, it is dropped through the bottom of the chamber and into a Ghoul tube.

One Ghoul tube worth of Dark Water creates one Ghoul.

Energy moving through the Water vapor; most likely a visible form of Slug energy, since "What Lies Beneath" shows that only Dark Water, and no machines, are needed to Ghoul Slugs.