Geoshards are Crystallizer Slugs that attack through crystallization. Its able to create a projectile that crystallizes the target on contact.

Using it in a duel is risky since it is capable of crystallizing a person's insides, as well as the outside. There's a chance that the victim could die if hit in the wrong place. However, the effects can be reversed by having a Slyren use Operattack. Their native cavern is The Crystal Cavern.

In both Protoform and when transformed, their bodies are mainly yellow and teal. They have yellow underbodies with teal covering the top of their back, arms, and head. Both forms have rough mint green crystals coming out of the slug skin to horns, but the transformation shows many more covering the top of its body as well as the face.

When transformed, along with more crystals covering them, their teeth become sharp, green, and come out in an overbite. They have four arms with three claws each.

The Geoshard is a defensive slug. It only has two moves and thus its use is limited in battles, unless a slinger is geared towards being strategic. Crystallist is its only offensive move as it can be used to quickly and effectively immobilize an opponent. However, this usage is rarely adopted as if it hits the right place, it can be fatal through crystallizing the victims' heart or brain. The non-lethal points on the body are rather hard to locate and, since most slingers don't intend to kill their opponents, results in the attack not being used often on slingers. Most slugslingers will only use this move to create a wall of crystals for protection, some sort of platform, or any other number of objects for other purposes (like a surfboard).

Domenator could be one of the best defensive moves out there, as it creates a nearly impervious dome. It is capable in withstanding the attack blow from a Grimmstone's Batterup and a Hop Rock's Sploder. Though, the crystals can be shattered if many slugs or ghouls are fired at once, or from the attack of a Slyren slug. 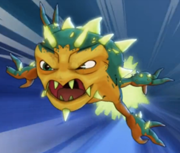 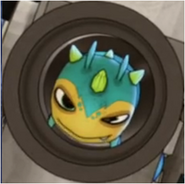 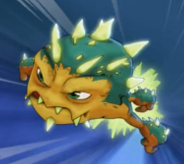