Gazzers are common air slugs, similar in appearance to Armashelt and Crystalyd Slugs. The only members of the Shane Gang to own a Gazzer is Eli Shane and Kord Zane. In "The Journey Home," It was first seen making Lode laugh so much that he fired one of his Ghouls at Locke by Kord Zane.

A famous Gazzer is Joker who belongs to Eli Shane.

A ghouled version of Gazzer has not yet been seen in the show.

In Protoform, Gazzers are similar in shape to Armashelt and Crystalyd Slugs. Their skin and antennae are an ashy brown while their armor and eyes are primarily orange, though their armor has yellow outlines.

The Gazzer is a purely strategic slug. Hilariteaser can make the opponent laugh uncontrollably and therefore misfire, causing their slug to shoot at their ally or in the entirely wrong direction. Stompchomp "disables" an opponent by making them focus on dancing instead of slinging, then allowing an opponent a clear shot to finish them off or add injury to insult. Taggro is good when making distant and precise shots as well as ensuring the slug will not miss the target. 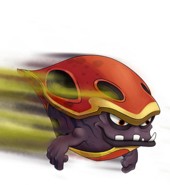 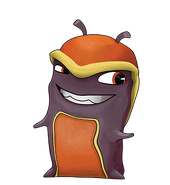