"The Emperor Strikes Back"

A Frostfang is the Ghouled version of a Frostcrawler. They are used by many of Dr. Blakk's operatives. This is C.C.'s favourite ghoul.

In Protoform, they have a navy blue body, light teal hands and head markings, one eye with black sclera and a red iris, black 'veins' coming away from their eye, and finally sharp needle-like teeth.

When transformed they look much like their non-Ghouled selves. They have large open mouths and fangs, navy blue fur, teal hands, teeth, and two horns of the same color. Behind their horns, they have two sprouts of fur that appears to make two more horns. Their underbelly is a lighter blue in comparison. 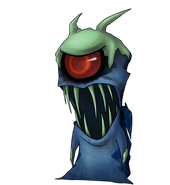 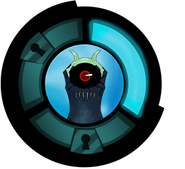