Frostcrawlers are common freezer slugs, commonly found in Frozen Northern caverns such as Chillbore Cavern in The 99 Caverns.

A famous Frostcrawler is Chiller, who belongs to Eli Shane.

A ghouled Frostcrawler is called a Frostfang.

A very versatile slug, Frostcrawlers are slugs that can be used in offensive, defensive, or miscellaneous situations. Rarely, they are used to freeze slugs, slowing them down. Occasionally Frostcrawlers are used as defensive slugs by creating thick sheets of ice.

Equipped with an offensive arsenal, Frostcrawlers are rare among slingers. With moves like Glaciator and Frostwall, a well aimed frostcrawler may be able to quickly end a battle.

Effects of a Frostcrawler's attack.

Combo move of a Frostcrawler and a Tormato

A Christmas Tree made by a Frostcrawler 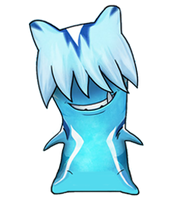