"It Comes by Night"

Frost aka Ice is a character in Slugterra and the Slug It Out! game.

Cool as ice and twice as slippery in a duel, Frost and his bandolier of highly trained Frostcrawler slugs will give anyone who gets in his way a chilly reception.

His only major role currently is in "It Comes by Night" by the name Ice, where he and other bounty hunters try to capture the High Plains Monster. He is seen in A Distant Shore.

In the game, Frost participates in the tournament. He is the second enemy Eli faces in chapter 2, using only Frostcrawlers. After beating him, Eli gains Chiller. 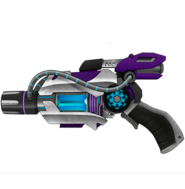 The concept art of Fire and Ice's blasters