The Fall of the Eastern Champion

Frightgeists are rare psychic element slugs with cyan skin and white patterns on their body. Their protoform has a skeletal pattern. Its first major appearance is in the episode "Deadweed" and is found in the cavern of the same name. This slug has mostly fear-related moves. They are notable for being the only known Slug who can directly attack a Darkbane.

A famous Frightgeist is Spooker, who belongs to Eli Shane.

A ghouled Frightgeist is called a Nightgeist.

Frightgeists are excellent defensive slugs. Its Spellaport move provides slingers an excellent defense against their opponents, and can also be considered an offensive move if slugs are rerouted toward their slinger. It is most well known for its Frightningrod move, an effective attack that terrifies even the toughest slingers, and its Slugbane move, which scares Slugs. This can be a useful defensive attack against experienced slingers, as it takes away their options.

Back view of Spooker

Eli and Spooker ooking around for the ghosts

I'll wipe that smirk right of your face! 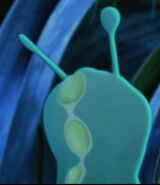 This Frightgeist error actually reveals what a Toxis slug looks like from behind!
Community content is available under CC-BY-SA unless otherwise noted.
Advertisement