Most Slugslingers, but Eli, Kord, Pronto, King of Sling, Sally, Hoshi & Swick are the most notable ones

“Flopper slugs. This boneless, dimwitted powerless waste of space are the embarrassment of the slug species.”
―Pronto to Noodle

Floppers are the weakest type of Slugs. Their element is unknown. They are very lazy. They can shoot a trail of smoke behind them like a Flatulorhinkus, and on contact, Floppers produce a splat of slime. They don't transform but they are useful in a pinch such as when you don't have a Slug. Eli has one named Noodle that he uses in the episode "Roboslugs". One popular use for Floppers is accuracy training or sparring, as it can't actually hurt an opponent.

A famous Flopper is Noodle, who belongs to Eli Shane.

A ghouled version of Flopper has not yet been seen in the show.

the flopper is, without doubt, a weak slug, not even as useful in battle as a fandango, but a creative slinger could make it somewhat threatening: a foe who is not paying attention to where he's walking could trip thanks to a flopper that previously was tied to a surface. small things can be knocked over by shooting a flopper. the only "attack" that a flopper has is leaving a trail of smoke behind him as he flies: even if the odds of this attack actually working are low, if it does immediately slinging a frostcrawler or an arachnet is a good way of trying to win a duel, as the opponent will be somewhat vulnerable for a short period of time. another trick with low odds of working but with an average reward if it does is shooting the flopper slug in your foe's blaster: the slug will backfire and hit its slinger

A Flopper, having no effect upon impact at velocity.

Dizzy with Burpy and Joo Joo and his owner Hoshi 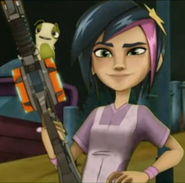 Ghouling a flopper - left of the Arachnet.
Community content is available under CC-BY-SA unless otherwise noted.
Advertisement