Flatulorhinkuses are purple toxic Slugs that emit toxic gasses. They are usually found in Stinkhole Swamps and its power type is Toxic Stink. Pronto has one named Stinky, and they are Pronto's signature slugs. When they transform they gain pores which release toxic fumes and turn into salamander like creatures. They are apparently called stinkers by Slugslingers, noted when Trixie called Pronto's "just a stinker".

A famous Flatulorhinkus is Stinky, who belongs to Pronto.

Another famous Flatulorhinkus is Whiff, who belongs to Eli Shane

Designed as more of a stink bomb, a Flatulorhinkus is a slug meant for offensive slingers. A slug that, with well training, can cause massive damage, especially when used against a group. With the ability to release noxious chemicals in both protoform and transformed, the Flatulorhinkus is a slug design for chemical warfare. it's ability to release disgusting gas even in protoform might also come in handy as well

A Flatulorkinkus about to attack using its protoform ability.

A Flatulorhinkus in Quentin's memories. 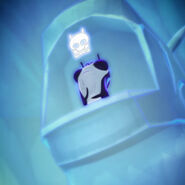 Combo attack of a Flatulorhinkus and a Fandango

In the Slug It Out app, a meduim level Flatulorhinkus can drain opponent's slug energy.