"It Comes by Night"

Flame aka Fire is a character first seen in the game "Slugterra: Slug It Out!" and later makes his TV debut in the episode "A Distant Shore".

This hot-headed slugslinger likes to use Flaringo slugs for his fiery attacks.

His only major role currently is in "It Comes by Night" by the name Fire, where he and other bounty hunters try to capture the High Plains Monster. He is seen in A Distant Shore. 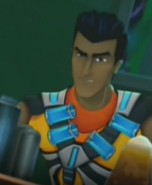 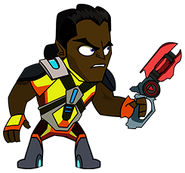 Slug It Out! version

The concept art of Fire and Ice's blasters