The Fire Elemental Slug is a quite shy but kind of angry slug. He has one cream coloured horn on his forehead and gloves that let him hold fire. His tail (back) has the same properties as his gloves. He has a tooth that sticks out of his mouth when in protoform but not in velocity. The main colour scheme is red, yellow and orange. When he transforms he can easily run on four hands. He would probably not be best to play hot potato with though due to his body heat.

It used to lived in Upright Cavern, but now it lives with the Shane Gang due to being hunted by Blakk and The Goon. In "Slug Fu Showdown", He destroyed a billboard and pointing out that the Elementals (except Doc) are more unpredictable than ghouls. He is also one of the only natural forces that can melt Jellyish slime. Eli used Slug Fu to stop him from destroying Slugterra in Slug Fu Showdown.

In the movie, Slugterra: Eastern Caverns, the Fire Elemental was used against the Dai-Fu and easily took down a ghoul slug and a Stone Warrior and the Dai-Fu.

In The Return of the Eastern Champion, which is the last episode of season 3, he and the other Elementals (except Doc) become Guardian Slugs to seal the guardian gate and trap the Emperor. 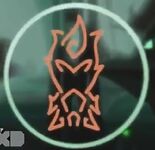 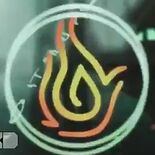 The Fire and other elementals with pronto's pants 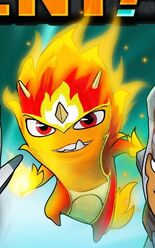 Earth and Fire being unghouled 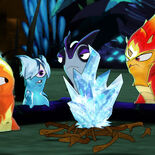