Endangered Species is the eleventh episode of Slugterra.

Long thought to be merely a legend, an Enigmo Slug has finally been spotted. The bidding is high for this rarest of all slugs, and so is the competition to be the first grab it! Eli and the gang actually beat Slugterra's most vicious slug hunter to the prize--only to find that the hunter is now hunting them!

It starts when Trixie talks the gang into a Slug hunt for the rare and near-extinct Enigmo Slug. As they arrive they find out that they aren't the only ones hunting for the Enigmo, although one rich couple is waiting to buy it from the slinger who catches it. Eli and his gang try to talk the other hunters to stop cutting down the forest because it is also destroying the other native Slugs habitat, they agree that cutting it down is a bad idea and decide to simply smoke the Enigmo out with Flaringos.

During the fight between them, Eli stumbles onto a deadly slug trap and a slug about to fall in it. Eli quickly saves it and returns to the dueling area to tell the hunters how dangerous their traps are and how the Slug was almost seriously hurt. To Eli's surprise Trixie reveals that the Slug he saved is the Enigmo, at that moment the true owner of the trap, a feared Slug hunter named Gerhard Stocker, who demands the Enigmo and the trap back. When Eli refuses a shoot-out between the gang, Stocker and his Slughounds it ends with Eli using the Enigmo and getting hit by it in a backlash, Trixie saves Eli and asks what did the Enigmo look like when it transformed to which he replies he wouldn't know because the Enigmo's abilities have caused his vision to became distorted. Now the gang must find the Slug, evade Stocker and his hounds and guide Eli around, during the hunt for the Slug each member tries to save it from one trap after another since it seems to enjoy playing near or on them. Kord gets shot with a hundred Slug tranquilizers, Trixie is caught in a cage and Pronto gets caught in a pit trap leaving Eli to face off against Stocker and his hounds solo. After pulling off some good evasive maneuvers and using Chiller and Spinner to swing away from the hounds, he only crashes and get cornered by Stocker, who now has the Enigmo.

With Eli keeping him busy, Burpy talks one of Stocker's Slugs to switch with the Enigmo which Stocker fires and hits Eli with thus restoring his vision. They face off one more time but this time Enigmo hits Stocker causing him to leave in a daze, Eli frees his friends and as they talk about how odd the Enigmo's ability is. Pronto "accidentally" leads them back to the rich couple where they ask Eli how much he wants but Eli declines since it was such hard work just trying to save him, let alone catch him. So they head back to their Mecha-Beasts with Pronto still trying to convince Eli to sell the Enigmo. 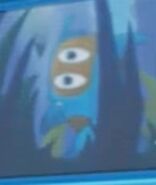 Retrieved from "https://slugterra.fandom.com/wiki/Endangered_Species?oldid=84656"
Community content is available under CC-BY-SA unless otherwise noted.